#123
The Hammer said:
NO excuse for not defending that last play.

I hope the first thing the team gets when they get to the locker room at halftime is an earful about that last play. Completely unacceptable.

Other than that, great first half.
Click to expand...
It was .9 seconds man ... You normally give them the shot and not risk fouling 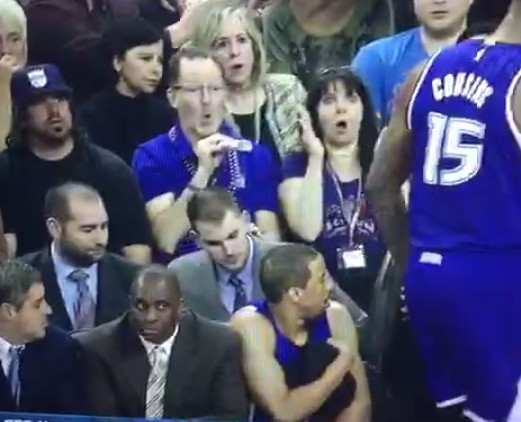 #126
These grounds be cursed i tell ya! CURSED!

#127
lawlman91 said:
Does he think it's gossip?
Click to expand...
Maybe God's Plan was to wreck that chair.
T

#128
mac said:
It was .9 seconds man ... You normally give them the shot and not risk fouling
Click to expand...
You get in front of him and contest. You don't give him an open shot.

#129
The Hammer said:
NO excuse for not defending that last play.

I hope the first thing the team gets when they get to the locker room at halftime is an earful about that last play. Completely unacceptable.

Other than that, great first half.
Click to expand...
Ray did contest it...

#130
Tetsujin said:
Maybe God's Plan was to wreck that chair.
Click to expand...
Maybe its gods plan for Hassan to join the Kings once again?

#132
Now that was the kind of basketball we're going to have to get used to seeing under Coach Karl. We punched back when the Grizzly bears tried to play rough, we capitalized on plenty of their mistakes, and we played TEAM basketball.

1. Jesus christ, when was the last time so many players joined in on the fun? Not only scoring wise, but effectiveness. Casspi, D-Will, Reggie, Ben, Rudy, DMC, EVERYONE had an impact in this first half. That's what team basketball is all about. We never saw this under Coach Malone.

2. Rudy Gay just plays so calm and collected. Boy is he smooth or what! His sweet stroke was on in the first half as well as his energy, as he really hustled to get a few of those buckets.

4. George Karl! I love this guy! He sees momentum changing even after the Kings had just knocked down a three, so what does he do? Let the collapse begin? NO. He gets T when it looked like DMC was about to get a technical and FIRES THE TEAM UP. By doing so he let the team know LOOK GUYS, I GOT YOUR BACK. The run changed then and there and momentum went to us.

3. Ben McLemore! Need I say more?! This kid is growing up right before our eyes! His development will take leaps under Karl as opposed to prior coaching staffs.

Big slow it down brawlers vs. pretty boy run n gunners? We'll see. Actually suspect the key player of the series won't be anybody pretty, it'll be Bogut. He's the grit that makes the weenies dangerous come playoff time.

#134
They let some points get away from them at the end of each quarter. But overall, solid half.
T

Click to expand...
As long as chair remains relatively stationary should be OK
2

#137
lawlman91 said:
But I thought you hated Ray
Click to expand...
have no hate for kings players! I still believe that Ray is a 6'3 SG. . Solid work in replacing Collison though

#139
I really wish Cousins would stop being a point guard.

#145
can someone explain to me how that is an offensive foul from cousins? i thought you have to have feet set and outside the restriction zone?

#148
Also, if we reversed the roles and cousins was being randolph he'd have been instantly tossed out. lame.

Staff member
#149
Capt. Factorial said:
Those two elbows looked completely intentional. League should review and suspend Randolph.
Click to expand...
Based on earlier this season, I think we already know how that's going to turn out.

#150
Zbo should have been ejected.