The KF Wiki Project could use your help.

A problem has been encountered. His name is (was?) Rex Hughes. Former Kings coach for those who don't know. International man of mystery too. Possibly abducted by space aliens. Now Rex was nobody much in NBA circles, and like many nobody muches who's primary careers finished up before the birth of the internet, comprehensive knowledge is sketchy. Basically there was no Wikipedia when he mattered, so nobody bothered to collect his information.

Here is what is known:

1960s through early 70s: ?? A lost decade. No records. No knowledge. Could have been a shrimp fisherman. could have been at Woodstock. You would think he was off coaching/assistant coaching somewhere but there is no record of what he did.

1974-78: really disastrous run as head coach of Kent State University. How/why he got hired is completely unknown. Somehow he did, and he went 27-63 before getting fired.

1979-80: hooked on with Jerry Tarkanian at UNLV as an assistant coach. Would have known Tark, probably Theus.

1980s all the way through 1991: unknown again. He disappeared for a solid decade + with not one mention. Could have been back to fishing shrimp. Could have been selling vacuum cleaners, in prison, in the astronaut program. There is NOTHING. He might even still have been at UNLV, but I can't find anything to say so.

1991: somehow he is on the Kings staff, no idea how or why he was hired, or when, but Motta has him. Somehow he is lead assistant I guess, despite only head coaching experience being 15 years back as a failure at Kent State, and coaches Kings for half a season.

1992: after kings hire Gary St. Jean, Hughes goes to join Tarkanian as he takes over the Spurs in 1992. But Trak floipped, was fired inside of two months. That year Hughes coaches one game as head coach for the Spurs, maybe filling in after Tark was canned? And that is IT. Did he finish the season as an assistant there? Was he canned a few days later? Did he ever return to the league? Did he end up flipping burgers at McDoinald's?

1993 onward: and again he completely disappears. Seriously, this guy is either incredibly private and must be pretty proud at his ability to completely cover his tracks, or he must be incredibly depressed as he is completely forgotten about, there are no further records of anything. Not in basketball, not anywhere. In fact the only reason to suspect he is ever still around, or was circa 2009 is that Jim Rome randomly interviewed him in 2009 as part of some gimmick where everyday he was interviewing somebody else named Rex. How/why he even remembered Hughes existed I don't know.

Can ANYBODY here fill in any of these blanks?

without more information this page is looking like a stub. He existed. He failed at Kent State once long ago. He knew Tark. He was an interim for us. He was abducted by aliens. The end.

If this guy is a spy, he should give classes on who to disappear. Anybody know anything more?
Last edited: Oct 8, 2014

#2
Rex Hughes (1956 – basketball, football). Hughes played three years on the varsity basketball team at RUHS. In his many seasons as a Sea Hawk, Hughes set numerous records and accomplished many feats both on the gridiron and on the basketball court.

Hughes was known for his skill in basketball and for his excellent sportsmanship and leadership. For his all-around playing ability in the sport of basketball during the 1954-55 season, Hughes received the distinction of being named to the first team All-Bay League and All-CIF basketball teams. Hughes averaged 19.6 points per game. In 1955 and 1956, he led the Bay league in scoring.

Hughes first attempts at coaching began as an assistant basketball coach at North Torrance High School. In 1964, he returned to his alma mater. In his first year as the head basketball coach, he did a remarkable job. Hughes guided the team to a phenomenal 26-1 overall record. His team was ranked No.1 in the CIF Southern Section, No.1 in the state and No. 3 nationally. The pressure of 26 consecutive wins caught up with the Sea Hawks in the semifinals and they were defeated in a heartbreaking loss to North Torrance. That same year, he was named Coach of the Year.

Hughes served as the men’s basketball coach at Kent State University from 1974-78. He would serve as an NBA head and assistant coach. Hughes served as a head coach for part of a season with the Sacramento Kings, and a single game (as an interim coach) with the San Antonio Spurs.
Click to expand...
Source: http://www.easyreadernews.com/75396/redondo-union-athletic-hall-of-fame/

Staff member
#3
Well, its certainly something. It helps reduce the 60s ??? period by about half. Went into high school coaching...then shrimp fishing.

Hughes, 51, is expected to accept and become the third member of the Kings' coaching staff along with head coach Dick Motta and assistant coach Bill Berry.

Player personnel director Jerry Reynolds spoke highly of Hughes, a part-time scout for the Kings in 1987.

He's been offered the job, and he basically has accepted, Reynolds said. He told me he wanted the job. The only thing that
Click to expand...
Read more here: http://nl.newsbank.com/nl-search/we...t=YMD_date:D&xcal_useweights=no#storylink=cpy

It costs $2.95 to download and read that whole article.

Staff member
#6
yay. Between your contributions, and the ones in the book I just listed, I think we can piece together a fairly complete biography. Given how sad his wiki page is, we might be the only people to have a full one up.

That's reasonably compelte. Might like to know when he first got hired by the Kings as a part time scout, but I can roll with what we have there. Thanks for the help!

According to this blog (in dutch) he was the first Americain player in Belgium Basketball competition in 1963.
He played with BBC Athlon Ieper. He also did PR there and was a youth coach. 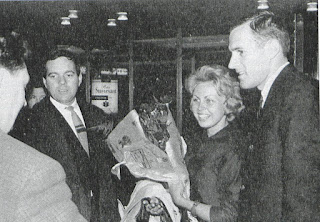 In 1963 he was in my hometown: Ypres in Belgium. He played in BBC Athlon Ieper. He also did PR and worked as a youth coach.

This is the blog of the firm that sponsored the team in that time:

You can see a photo of him when he arrived in Belgium.