#1
January 2nd, 2001. A day that will forever live in infamy. Lives changed. Careers were ended. And a KingsFans.com award was created that would endure until the end of time.

That's right. Tuck in your kids, put your dogs in their crates, and get those obnoxiously large party hats that I sent you all in the mail last week on.


https://twitter.com/statuses/1345386940540051458
Many things about that day (boxscore here) still remain a mystery.
1 - How did Tony Delk manage to drop 53 points on arguably the greatest Kings team of all time?
1b - How did Tony Delk manage to drop 53 points while only shooting one freaking three in the game?
1c - How can you touch the ball enough times to score 53 points and still somehow not accidentally pick up an assist or two?
2 - Why? Just why?
3 - At what point in the game did Phoenix's coach just throw his hands in the air, shout "**** it", and replace his entire playbook with Tony Delk isos?
4 - Did it ever occur to Tony Delk that stopping at a nice round 50 would have probably been just as impactful?
5 - How come Grant and Jerry's go-to example of the Kings getting torched for an absurdly hot night was (future HOF guy playing on the greatest team of all-time) Klay Thompson dropping 37 in a quarter and not (journeyman backup point guard) Tony Delk dropping the world's most ridiculous 50-burger?
6- How the hell did the Suns still lose this game?!
7 - Can you imagine the sheer pandemonium and hot take waves sweeping through the internet if Kings Twitter had been a thing back then? 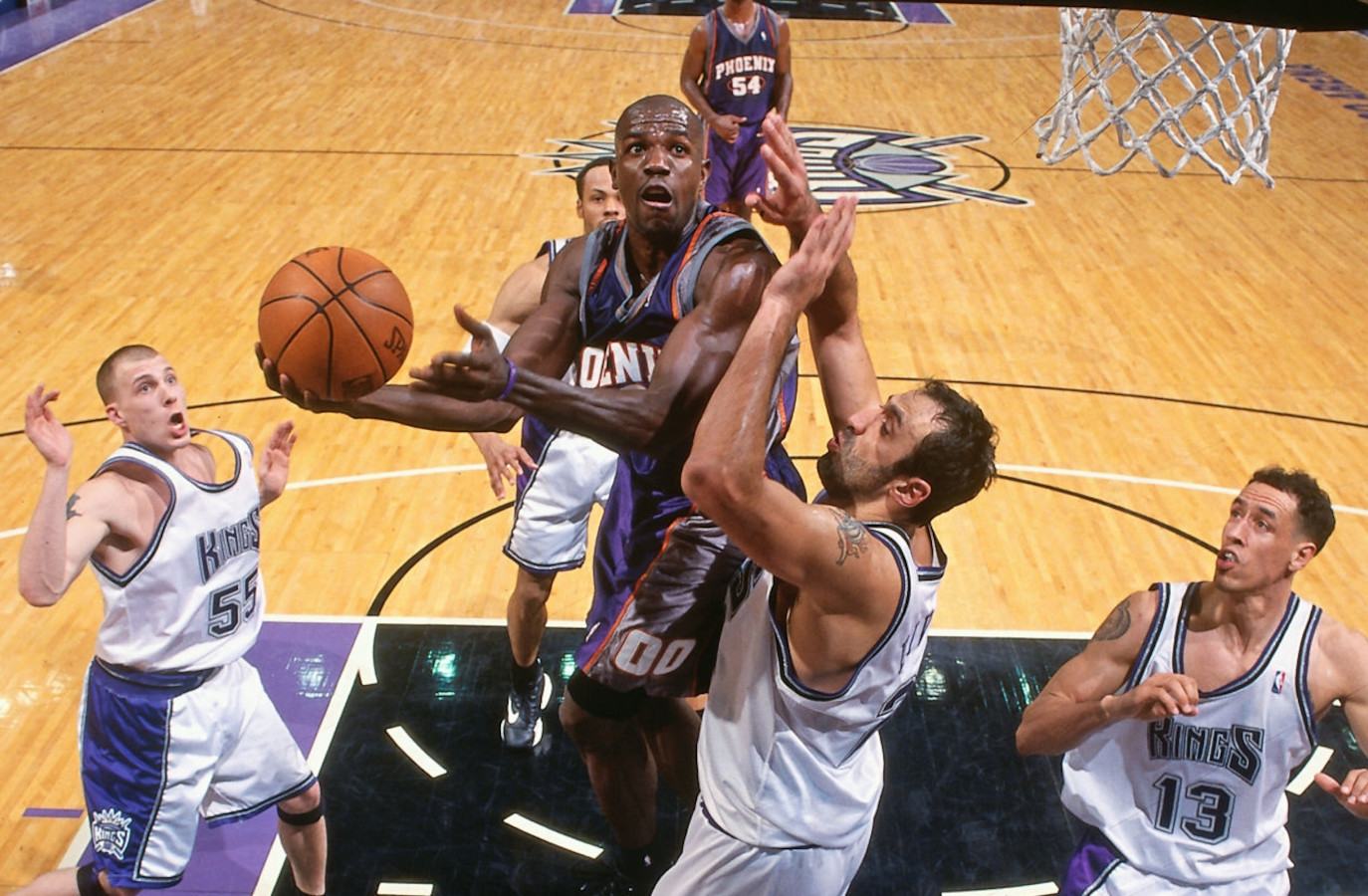 Tony Delk Memorial Award - Eric Gordon, who, while long having been a Kings killer, came into the first game of his season looking rounder than the basketball himself. Airing bad shot after bad shot in the first half, in the second half, Gordon started hitting those same awful shots, proving to be an inspiration to chubby people everywhere. Congratulations on being the TDM award winner on this most holiest of days. Really it's a shame that there weren't any random explosions from unexpected sources and/or former Kings but I'm sure that if Bruno Caboclo were active it would have been him.

Mikki Moore Award - Danuel House. Considering his standing as one of the holdover role players from the D'Antoni Rockets, House spent most of his night running the rim hard and trying to get on the NBA.com highlight real every single time he touched the ball.

Jason Hart-Andres Nocioni - Hassan Whiteside. In his only short stint, early on in the game, Hassan managed to somehow look slower and less athletic than a 270-pound dude who tore pretty much every single major ligament in his lower body at least once and put up one turnover and foul.

Luke Walton Vacuum Cleaner Award - Marvin Bagley, who followed up the best compacted performance of his young career with possibly his worst, missing almost every shot (though he did make a nifty pass in transition early on) and getting thoroughly dominated by PJ Tucker every time he decided to dribble the ball into traffic.

WTF Moment of the Game - John Wall meets Tyrese Haliburton at the rim, clearly fouls him and sends him crashing to the floor. The Rockets decide to challenge the call, somehow win, but end up giving the Kings extra points anyways because Harrison Barnes put the blocked ball back in for a hoop.

---
Matchups remain largely the same as last game although now we'll be missing Haliburton off the bench. I do expect Bagley to look better tonight that he looked last game. But it will be interesting to see who gets time in Haliburton's absence (just kidding, it's Cory Joseph).

The Kings showed they can keep pace with the Rockets last time. If they could mount any sort of defensive presence against Chubby James Harden and the island of misfit toys, maybe they could even pull off the win.

Final Predictions: Kings 122, Rockets 115
The Kings get payback. De'Aaron drops his first 30 point performance of the season. John Wall looks good but not as unexpectedly awesome as he did on Thursday. Marvin gets his revenge. CoJo somehow plays 49 minutes in a 48 minute long game. Kings win. There is much rejoicing.

#2
Tyrese has a bone bruise in wrist, unknown if he plays.

#3
Tetsujin said:
WTF Moment of the Game - John Wall meets Tyrese Haliburton at the rim, clearly fouls him and sends him crashing to the floor. The Rockets decide to challenge the call, somehow win, but end up giving the Kings extra points anyways because Harrison Barnes put the blocked ball back in for a hoop.
Click to expand...
I think I heard The Rookie will miss a couple of games. Interesting no call by the refs even after a review. Meanwhile Wall and Harden run over their defenders and get a call.

Staff member
#4
Tetsujin said:
CoJo somehow plays 49 minutes in a 48 minute long game.
Click to expand...
I figure it goes like this: Playing more defense than he has ever done before, James Harden swipes feebly at Bjelica's back as Nemanja drives by him to the hoop. Harden's finger gets caught in some loose stitching under the number on Bjelica's jersey, tearing out the lower left hand portion of the numeral as Bjelica blows past. Bjelica is called for the offensive foul. The official scorer, working from home on a 12-inch monitor, records the remainder of Bjelica's minutes as going to #9.

#5
King Baller said:
I think I heard The Rookie will miss a couple of games. Interesting no call by the refs even after a review. Meanwhile Wall and Harden run over their defenders and get a call.
Click to expand...
Looking forward to a concrete answer on how maybe games missed. So far I’ve seen no games, one game, two games and 3 or more.

#6
CBS is saying Haliburton is out for two games.

#7
No Harden for Rockets today, gotta get that win.

#9
Kings should win with no Harden getting ridiculous whistles all game.

Drag we don’t get to watch Haliburton for a couple of games,

#11
The question is what do they do in Haliburtons absence? I think I have an inkling but there are a couple of bodies at SF that can allow you to play a more up tempo switch style still on the roster. The impact Haliburton has had will certainly be missed regardless. Buddy has to really step up now. Hopefully they don't try and use him as more of a playmaker, he needs to be spotting up.

Webber was ejected in the 1st quarter

J-Will sealed the deal In overtime

I don’t think I realized Delk was having a ridiculous night until sometime in the 4th when I looked up and saw he had like 42 points with several minutes to play in the 4th. Kidd was finding him for the same exact mid range shot all night. I bet his shot chart didn’t have much variety..but then again that was 20 years ago.

#13
Mark Jones back despite having called the Peach Bowl last night.

#15
No Harden. No Hali. Bags gets a double double, the Kings win.

Staff member
#16
Tetsujin said:
“Sprained ankle” they say
Click to expand...
Must have done it at the club, because he didn't do it in the last game.

#17
Capt. Factorial said:
Must have done it at the club, because he didn't do it in the last game.
Click to expand...
The man’s been running with a “sprained ankle” since he got to Houston.
D

#18
Walton saying GR3 and Guy will replace Hali minutes, so of course, they probably won’t knowing how Walton operates.

#20
Capt. Factorial said:
Must have done it at the club, because he didn't do it in the last game.
Click to expand...
I think it was in the buffet Line
D

#22
Holmes now misses a chippy.....we did that all last game as well
D

#24
dude12 said:
Holmes now misses a chippy.....we did that all last game as well
Click to expand...
was obviously too close to the rim for him

#27
Bagley has got to stop bringing the ball down low....come on kid
O

#29
Stop bringing the ball down.